They were one of New London’s biggest Bands. Now for the first time hear the story behind the band, how each member joined, their rise from local band to New England’s next big thing to the eventual death of their lead guitarist. See rare footage of the band of their early days to their two 2011 reunion shows.

The King : We are all stuck in a moment we can’t get out of. “The King” is a one-actor film of King Lear with just the character of Lear .The other characters are objects with whom he interacts, such as the Fool as a broom. “The King” deals with a father who has not gotten over the death of his child. He is repeating the moment over and over again. My role as the editor of “The King” was to add emotion to the character of Lear. Choices of cuts and use of montage helped me do so. When Lear is frantic, I sped up the cuts. When Lear is distraught over the loss of  Cordelia I slowed down the cuts. 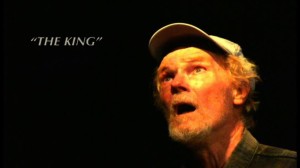